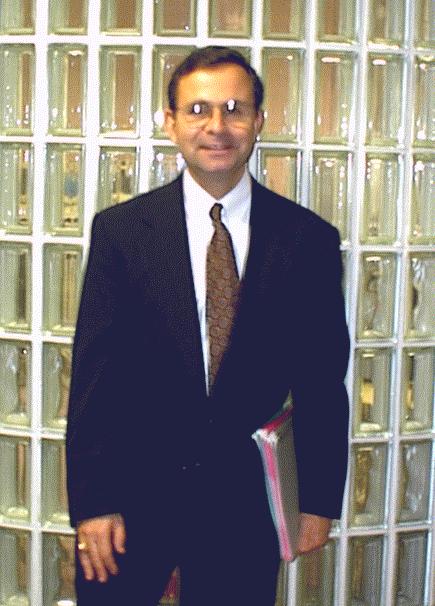 Nick Ara is a popular Long Island, New York based lecturer, commentator and consultant. As a Senior IT Specialist for IBM Corporation and former Staff Director for Bell Atlantic's Advanced Learning Technologies, Nick draws upon a wide bredth of experience in the ares of networking, systems, data communications and electronic commerce, as well as software asset management and IT financial management. What sets him apart from other instructors of technology, however, is his ability to explain things in a non-threatening manner.

While he is probably best known for the hundreds of seminars and lectures he has delivered to large-scale clients of NYNEX, Bell Atlantic, Verizon, and IBM, his reach extends to the world of academia as well. He is the advisor and adjunct professor of the City University of New York's data communications program at York College - CUNY, where "Professor" Ara has been instructing students and designing laboratories in the Mathematics and Computer Studies department for almost 20 years. Additionally, Nick has also mentored dozens of students of the Empire State College of New York.

He has also delivering web-based seminars to students located in North America, Europe and the Middle East for the State University of New York International Programs. If that wasn't enough, Nick has written and performed in over a dozen technical education videos and has conducted video distance learning seminars for Verizon and the State University of New York's Center for Distance Learning. His latest effort involved co-authoring IBM's Tivoli Asset Management for Information Technolgoy (ISBN 073848878x). If you'd like, you may request an online copy of this book from Nick!

a 1998 interview with Nick by Rosemary Kelleher

RK: How did you get your start in data communications?

NA: It really started in the early 80's when I was working in NY Tel's mainframe data center as an Operations Supervisor. Data communications, or "teleprocessing" as it was known back then, resided in the Systems Engineering area. Our communications policies and practices came from AT&T. Remember, this was pre-divestiture.

My interest was drawn to the teleprocessing area because it seemed to be the most interesting aspect of data processing. The fact that an entire database could be transmitted across the state in seconds through telephone lines was an unbelievable phenomenon to me! The mysterious boxes of hardware with blinking lights, dials and strange sounds were different than any of the other mainframe components. I thought this stuff was pretty neat and soon found myself gravitating to this area of technology. I remember spending long, '3rd shift' nights over IBM manuals that described the operation of the 3705 communications control unit (CCU, or "FEP" - short for Front End Processor). In those days, my job really didn't require that I understand teleprocessing at the bit-level, but I found it interesting to learn how all this stuff gets sent from place to place.

RK: Did your managers recognize your interest and suggest that receive formal training in this area?

NA: Well, not initially. I really needed to prove myself from a competency standpoint first. I continued reading other books on the topic in order to obtain a broader view of data communications. I must have read all of James Martin, Uyless Black and William Stallings, each of whom contributing significantly to my broader understanding of the subject. For the practical skills, I began working with the systems engineers, technicians and teleprocessing support staff, I picked up a lot of OJT! Since I obviously enjoy the "dialog" aspect of technology, I didn't mind sharing the information I had learned. Soon I was asked to give tours of our data center to newly hired programmers, graduate students from nearby colleges and senior managers in our company. This gave me the much needed exposure and helped to convince my superiors to fund my technical education.

RK: Sounds interesting, but how did you get involved in the training of data comm?

NA: As luck would have it, an opening in the corporate training center came along just as the company was about to consolidate and relocate my data center to a new facility upstate. This was in 1985. One of my contacts in the HR organization remembered me from the tours I had organized and offered me a position on the training staff. Not wanting to relocate, I decided to accept the position and become a trainer of mainframe systems, which included teaching teleprocessing.

RK: 1985? That was right around the time that personal computers were beginning to make inroads into the corporate world. Did you find yourself teaching PC subjects?

NA: I sure did. Everything from CP/M, to DOS 1.15; from dBaseII and SuperCalc to WordStar 2.0! I wonder how many of my students today remember those old apps and operating systems? I also instructed mainframe access on IBM 3270 PCs and taught Crosstalk XVI for those folks needing dial up connectivity to mainframes, bulletin boards and other PCs. Seems like a long, long time ago.When I wasn't on the road instructing in the mainframe topics, I was back in NYC teaching PC stuff.

In 1987, LANs were starting to come on strong. We clearly needed to address the need for hands-on LAN instruction, so we built a 3Com 3+ ethernet LAN with a 3Com server which, I believe, had a single 20 megabyte hard drive. This was more than enough for training purposes back then. 3Com had the big OS in those days, and IBM's Micro channel Architecture was everywhere! The following year, we added a token-ring topology at the school and I taught IBM LAN Manager on those MCA machines, too.

RK: But you still didn't have a real data communications lab yet. Tell us about how that came about.

NA: Well, this part reads like a fairy tale! In 1989, I met Bill Gates during a lightly attended software demonstration of Excel in a Manhattan retail store. There were only about five other customers in the store with me. When his presentation concluded and Bill didn't seem to be in any rush to leave, I told him of my ambitious plan to start teaching datacomm 'to the masses', not just those technical folks involved in mainframe and LAN support. Bill encouraged me to pursue my plan, stating that in a few years "everyone will be involved in networking". Who would have anticipated the explosion of the World Wide Web, just four or five years later?

That year, along with Tom Phelan, my manager, mentor and good friend, the lab became a reality. Equipped with borrowed, retired, and recycled hardware, we purchased a dozen HP Protocol Analyzers, miles and miles of computer tables, and 386 PCs. We arranged to have circuits installed to interface with the X.25 PADs, cluster controllers, concentrators, 20 megabyte 3Com server, etc.

Soon our own Marketing Department heard of the neat things Tom and I were up to. It wasn't long before we were asked to support this effort by instructing students who represented some of our top clients. Soon after, I was named Staff Director of data communications training for the Corporation.

RK: That certainly does sound like a dream come true, but I know you didn't stop there. What else happened since then?

NA: We started with a six-course data comm program. By the time our company merged, we trained the technical staffs of over 60 corporations in Local Area Networking, SNA, X.25, Wide Area Networking, etc, in that lab. Of course, many of our past clients stay in touch with me. The lab still exists, upgraded to today's standards.

In time, we added additional staff members, training vendors, and consultants to the effort, all of whom have contributing greatly to our training effort. The merger only served to expand my span of control within a much larger geographic footprint. We've added dozens of courses in web technologies, HTML, Java, Java Script. The products and services grow as technology grows and so does our course offering. Today, we instruct over a hundred topics on a regular basis in these and other related areas. We presently cover a 13 state area, and occupy over 15 classrooms plus a two "traveling" rooms for suitcased sessions to off-site locations. The future is getting brighter every day!

RK: Any final thoughts before we close?

NA: I don't know. Is anyone still reading this page? From an education standpoint, I believe we have just started to scratch the surface. Much work lies ahead, you know. Wireless communications is still in its infancy and voice over IP looms ahead, as well. Access to the latest standards has become easier, due in no small part to the Internet, simplifying research and development. My observations indicate that interest in data communications has increased twelve times over the past 10 years, with enrollments in academic and corporate classrooms are currently running a parallel course of exponential growth. Web-based learning has brought training to so many who might have never been able to attend a traditional class.

For me, giving seminars and lectures is an all-encompassing preoccupation, not just a job. Unlike many, I don't look forward to the day I retire, but instead look to learn more to pass along to others. Expanding the team in new areas and new topics only helps me to be the Johnny Appleseed of training and education, a role I never want to relinquish. Thanks to my family, colleagues, and friends for the support. In so many ways, you are one and the same. Keep on learning!

Copyright ©1997 - 2011 Ara Research & Development.
All Rights Reserved. AR&D liability, trademark and document use rules apply. Your interactions with this site are in accordance with our privacy statement.